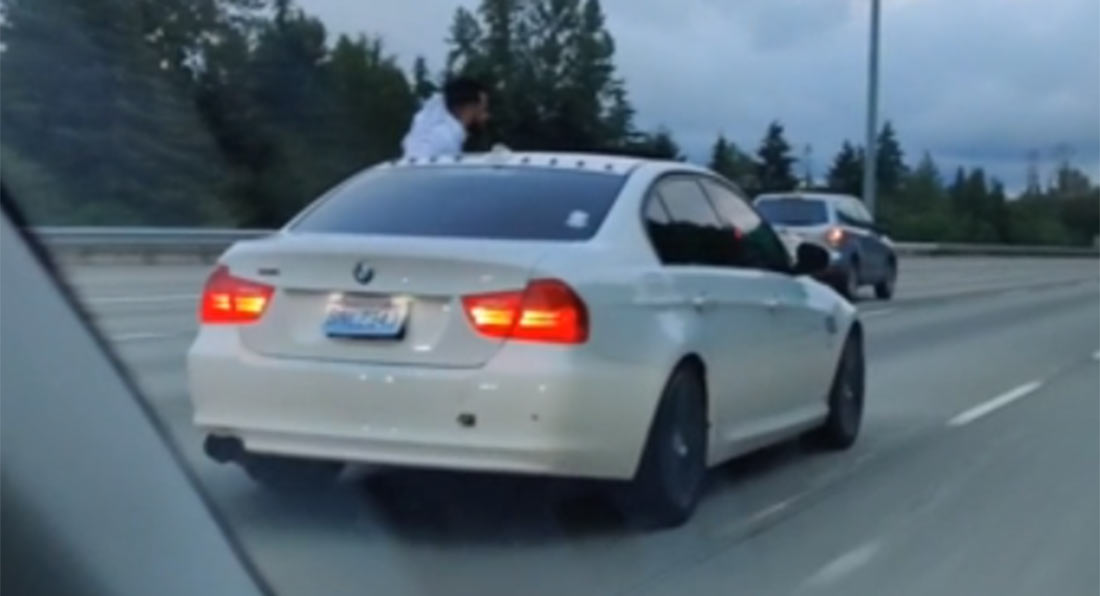 The driver of a BMW 3-Series has been caught on film standing out of the car’s window on Interstate 5 in Washington in a truly bizarre incident of reckless driving.

The clip was recorded by a driver who was following the white 3-Series along the interstate. Understandably, the guy filming was pretty shocked with what he was witnessing, exclaiming, “This guy is driving outside his car! Hahaha WHAT, STOP IT!”

Just how is the man managing to drive while sitting on the window frame? Since it seems highly unlikely that he actually has his foot on the throttle, we guess he had the car’s cruise control enabled. It is possible he is holding on to the car with his left hand while his right-hand grips the steering wheel.

Due to the dark tinting on the sedan’s side windows, it is hard to tell if there are any passengers in the man’s car that may actually be driving or, at least, holding the steering wheel. If there are, we wouldn’t be shocked if he was egged on by his friends to pull the dumb stunt. If he’s driving alone, that’s a different story and he could be nothing more than a daredevil chasing a quick thrill.

You don’t need to be a genius to know just how dangerous this is. If he hit another car, or another car hit him, the man would almost inevitably be thrown out of the BMW and could suffer serious injuries or be killed.

Watch this video on Streamable.

VW to replace software division boss, paper says
2020 Porsche Macan Turbo Is One Of The Best Handling SUVs On The Market
Could The Huracan EVO RWD Be The Best Lamborghini Ever?
Hyundai developed a manual transmission without a clutch pedal
Tesla cancels cheapest Model Y, Elon Musk says range would be too low